It is a perennial problem that students don’t seem to know how to revise for English exams. One of the things I’ve been doing with my year 11s is speed-planning essays. The idea is that, through regular practise, they speed up their thinking and their planning to better prepare them for tackling an essay in timed conditions. The more quickly students can select relevant details and make connections between poems the better; this is only going to happen if students have the opportunity to practise.

I thought I’d write a quick post about how I’ve approached speed-planning for Lit Paper 2 Section B of the AQA exam (comparing anthology poems) though it can be used for any Lit essay with any exam board. Please see my posts here and here with Lit essay stems to enable students to write endless exam questions of their own with which to revise.

Step 1: Write ‘Both’ statements about the anthology poems

Get students to write as many ‘Both statements’ as they can about any of the poems they have studied. They might link poems because of their message, tone, perspectives, ideas about conflict, ideas about power or even poetic devices. The more the merrier and you will sometimes end up with some pretty interesting connections as students rise to the challenge of writing as many as they can!

Both ‘Storm on the Island’ and ‘Exposure’ show the power of nature.

Both ‘Ozymandias’ and ‘My Last Duchess’ present the arrogance of men with power.

Step 2: Flip the statements into questions

Get students to take 3-5 ‘Both’ statements and flip them into questions in which one of the poems is named e.g.

Compare the ways poets the power of nature in ‘Storm on the Island’ and in one other poem from ‘Power and Conflict’.

Compare the ways poets present ideas about power and arrogance in ‘Ozymandias’ and in other poem from ‘Power and Conflict’.

Compare the ways poets present criticism of power in ‘London’ and in one other poem from ‘Power and Conflict’.

Of course some of the questions are more likely to appear in an exam paper and some may be so niche as to be very unlikely to appear. However, for this process it doesn’t really matter because what this task is about is increasing their thinking and planning speed. Having said that, it might be worth having a discussion about the validity of some of the questions written and what they think are the strengths/weaknesses of them – which students may appreciate once they’ve started trying to plan. Through this discussion you may start to build up a bank of ‘good’ questions and a bank of questions only evil examiners would set (though if they can think and plan for those then that’s a confidence boost, surely?).

Pick a question that a student has written and write it up on the board. Give another student a timer (ideally a comedy egg timer or sand timer) and start the countdown. Now model how you can plan an essay in 5 minutes and make sure you talk through your thinking.

Here’s one I did in front of my class… (excuse the vile brown pen – I can’t find the pretty coloured ones at the moment). 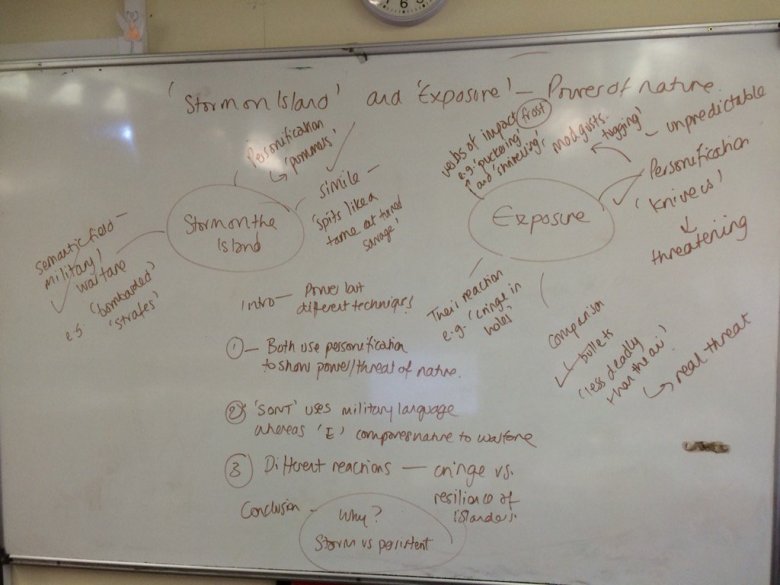 For this modelling I started by brainstorming (or whatever it’s called) all of the ways in which Heaney presented the power of nature in ‘Storm on the Island’ without really censoring myself – I don’t want students to dismiss an idea at this point that may prove fruitful – and then did the same for ‘Exposure’. Next I looked for points of comparison before quickly plotting the structure of my essay.

Step 4: Set the relay timer up

Now it’s over to the students to plan in 5 minutes. I’d normally do one after the other in pretty quick succession so students can learn very quickly where they need to speed up in the process – by the third or fourth plan they ought to have learnt from mistakes earlier on. In the first attempt, for example, students may not get past selecting details – and that’s OK because in the next attempt I bet they adjust so that they select fewer details so that they can get onto making links (which forces them to select the most important details).

If you’re feeling kind, give students a bit of time to write out their question before you start the 5 minutes for each plan.

What did they learn? What works? What doesn’t? Were some of the questions impossible? What does that tell us?

Fancy giving speed-planning a whirl? I’d love to know how it goes!