Here’s how a typical conversation goes when somebody asks me what I do for a living:

Stranger: What do you do?

Stranger: What age do you teach?

Am I brave? I wouldn’t say so and I’m not sure I’d describe my colleagues as such – or, if I were to, it wouldn’t be because they taught teenagers. We’re teachers, not lion tamers. I think, though, that lots of people don’t see much of a difference. In the public psyche the lion embodies teenagers’ potential for danger and disorder. A wild cat that’s roar is quite probably not as bad as its bite. We teachers, the lion tamer, need to be on guard. The whip is the threat of punishment used to keep the lion in check and the chair a distraction which keeps the beast focused instead of tearing us to pieces (I’m not sure what the top hat and red coat represent but I wouldn’t mind jazzing up my work wear…).

If teenagers were a cat, they wouldn’t be a lion they’d be a kitten. A fluffy, playful and occasionally naughty kitten. I’m not denying that there are a few teenagers who can be dangerous and violent but these are the exception not the rule. I wouldn’t describe being a teacher as brave because I’m not afraid of teenagers and nor should we be. Teenagers are not an unfortunate hazard of the job – they are oftentimes the thing that keeps teachers teaching in spite of all the pressures. Despite the bad press they get, the secret is that teenagers are hilarious and I don’t think we say enough about how brilliant they are to work with.

If I were to use just one adjective to describe working with teenagers it’d be: fun. I don’t have the data (shame on me) but I can say with some confidence that I have laughed out loud at least once every day that I’ve been teaching. Whether it’s laughing at a fashion faux pas, being asked the most bizarre questions or being given a ridiculous excuse, there’s always something to smile about. They are a genuinely funny lot.

As a recent example to illustrate my point, here’s the exam advice one of my friend’s students gave to their year 10 classmates before they embarked on a timed exam practice: 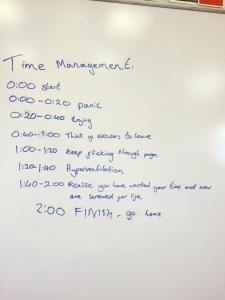 So if you’re thinking about becoming a teacher, don’t believe all you hear about teenagers. Remember that you used to be one and I’m sure you weren’t that bad. They might be more tech savvy, and certainly more socially connected than ever before, but they’re essentially the same. If anything you might pity them. At least when you went to school on a bad hair day (I was a teenager in the bleak times before hair straighteners) there wasn’t a picture of it plastered all over Facebook.

If you are a teacher, what one word would you use to describe teaching?